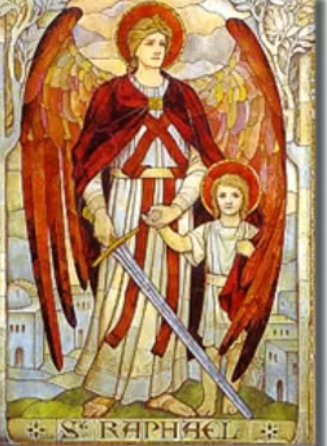 St Raphael’s name originates from the Hebrew Rapha which means healer or doctor.

Therefore Raphael is “the shining one who heals”

and also "the medicine of God”.

He is entrusted with the well-being of the earth and its human inhabitants and is said to be the friendliest of angels.

He is counted among the seven angels who stands before God mentioned in revelation.

Raphael has numerous titles and duties including guardian of the Tree of Life and the angel of prayer peace, joy, light and love.

In Scripture, he plays a prominent role in the Book of Tobit, which is part of the Catholic bible but is not part of the Protestant Bible nor the Hebrew canon.

In Catholic devotional lore there rare numerous stories about the deeds of St Raphael.

St Cyriaca (also called Dominica) who was martyred under the emperor Maximilian in the furth century was addressed by Raphael during her tortures. Identifying himself by name, said that he had heard her prayers and congratulated her on her courage saying that because of her suffering

She would glorify the Lord.

Sister Mary Francis of the third Order of St Francis (now known as the Secular Franciscan Order) lived during the late 18th century. She was frequently ill. She was told on one occasion by Raphael that he would heal her and he did. She and others were witnesses to the smell of sweet perfume, which she attributed to the presence of Raphael.

Raphael is also credited with healing others of various afflictions and of providing protection during journeys.

In Kabbalistic lore he is charged with healing the earth. He is also credited with healing Abraham of the pain of his circumcision and Jacob of his wounded thigh resulting from the fight with the dark adversary