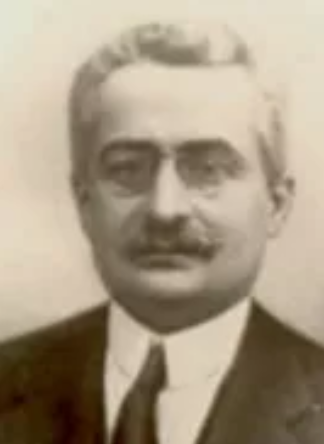 St Joseph Moscati was the first medical doctor to be canonized in modern times.

He was born in Benevento Italy on July 25, 1880, being the seventh of nine children to Francesco Moscati, a lawyer, nobleman and judge and Countess Rosa de Lucca.

At the time of his canonization John Paul II said:

"The man who from today on we will invoke as a Saint of the Universal Church,
is facing us as a concrete realization of the lay Christian ideal. Joseph Moscati,
head physician, a great researcher, University teacher of human physiology and
physiological chemistry, fulfilled all his many tasks with all the will and seriousness that these lay delicate professions require.

From this point of view, Moscati is not only an example to be admired, but also to be imitated by the physicians... He is an example even to those people who don’t share his faith".

He began his study of Medicine in 1897 at the University of Naples. In 1903, at the age of 23 he graduated with honours with a degree in Medicine and Surgery.

During his medical student years he experienced much ethical and religious adversity from faculty staff almost all of whom paid homage to materialistic and positivistic philosophies and rejected Christianity. He did not buckle under these pressure and resisted the temptation to conform. Despite such an environment of antagonism he would not remain silent about his beliefs. Despite such adverse conditions his faith was deepened and he began to practice it more conscientiously.

From 1904 he worked at the famous hospital Santa Maria del Popolo in Naples also known as the “ Incurabili”.

In 1911 he became the medical superintendent of the Incurabili. He was later given the chair in Chemical Physiology at the University of Naples and became world renowned for his academic research. He volunteered for the Italian Army in 1915 during World war One and became a major treating wounded soldiers.

As a clinician, teacher and academic he was exemplary with many patients, students and colleagues becoming devoted to him.

He had a special love for the poor and the homeless. On many occasions he would secretly leave money and a prescription with patients who were unable to afford medical care.

His medical practice was imbued with a Catholic vision of healthcare and the human person. He saw his patients as persons with a body and a soul and believed that the health of the body and the health of the soul were inseparable. He said: “ One must attend first to the salvation of the soul and only then to the salvation of the body”. Through his practice, he helped many lapsed Catholics to return to the Sacraments Before he examined a patient or engaged in research he would place himself in the presence of God. He was deeply committed to a prayerful life and received Holy Communion daily.

The adversity he faced as a medical student continued into his working life. In 1922, there was an attempt by faculty members of the University to stop him teaching. To this situation he responded with courage saying:

“ Love truth; show yourself as you are, without pretences and fears and without ceremonies. And if the truth causes you persecution accept it, and if it causes some torment, bear it and if for truth’s sake you should sacrifice your self and your life be strong in your sacrifice”  (Personal logbook, 1922)

Joseph Moscatti is a remarkable modern saint. He is a wonderful inspiration and example of holiness for lay people especially for Catholic doctors and medical students.

In his life and his work he reconciled religion and science, faith and reason, and a commitment to authentic holiness with a dedication to a lay profession.

As a layman he lived out the Gospel through his position as a teacher and physician.

His courage in the face of adversity, especially challenges to his faith by his peers, his untiring commitment to his work and his patients and his unshakeable faith in a time of  cynicism and scepticism all serve to make St Joseph Moscatti a wonderful role model for Catholic doctors and other healthcare workers and an ideal Patron Saint for the Catholic Doctors’ Association of Victoria.