"If you want to be happy, make others happy".

László Batthyány was born on 28 October 1870 in Dunakiliti, in a family that dates back to the time of the Hungarian conquest. He first attended the grammar school run by the Jesuits in Kalksburg, then he moved to Kalocsa. He completed his secondary school studies in Uzhhorod. He started university at the Economic Academy of Vienna, then went on to study at the Rudolphiana University. He graduated in arts in 1896 and in 1900 he became a medical doctor. 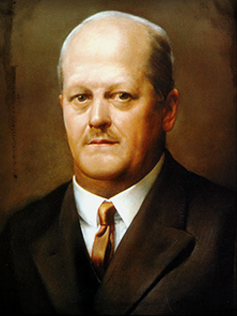 In 1901 he opened a hospital with twenty (later on thirty) beds for the poor next to the castle in Kittsee (a.k.a. Köpcsény), which he received from his father. He also set up a hospital in his castle in Körmend and equipped it with state-of-the-art medical equipment of his age, moreover, he also developed such equipment. He specialized in ophthalmological surgery. He treated the poor for free, gave them medicine, and he also gave clothes and money to the needy. He treated 60 to 100 patients a day. From 1921 he treated five thousand patients a year in his hospital in Körmend and he financed the salary of the hospital staff from his own funds. He took care of both the patients' physical health and their spiritual well-being. Before surgeries he used to pray with them, asking for God's blessing for his work. He used to say that he performed the surgery but it was God who granted the healing, he was only an instrument in God's hands. When the patients were about to leave the hospital, he gave each of them a prayer card or some booklet of spiritual reading.

In 1898 he married Countess Maria Theresia Coreth, who became a real partner for him. She was his right hand even in his work. They had thirteen children, and the principal law of their home and the source of the family's happiness was Christ's commandment of love. Their daily routine always included Holy Mass, common prayer and good deeds. From 1907 till his death, László Batthyány prayed the Little Office of Our Lady in Latin every day, and he prayed the rosary in the evening. In 1916, László, his son Ödön and his sister-in-law (Lili Coreth, who later became a Benedictine nun) entered the Franciscan third order.

In 1929 he was diagnosed with serious illness, cancer, and was referred to the Löw sanatorium in Vienna. He fought with the illness for 14 months, always firmly confident in God's goodness. Despite the terrible pain he suffered from, he always received his guests willingly and with joy. His heroic behaviour deeply impressed everyone and strengthened their faith. He died on 22 January 1931. The day before his death he asked his family: "Take me to the balcony so that I can shout to the whole world that God is good!"

His body was taken to Körmend, where it lay in state in the chapel of the castle. His cured patients and his poor came to pray in front of his coffin in endless cues and said sobbing: the prince was a saint. His body was buried in Németújvár (today Güssing) in the family vault.

His veneration constantly increased after his death, many people asked for his intercession. At the request of a multitude of faithful, his process of beatification was begun on 30 August 1944 by the archbishop of Vienna and the bishop of Szombathely parallelly.

After World War II, due to the adverse circumstances, the process of beatification was interrupted for a longer period and it was resumed in 1987 upon the joint initiative of the dioceses of Eisenstadt and Szombathely.

Let us pray for his canonization!
Official prayer of the Mass (opening prayer)

God, you granted Blessed László Batthyány-Strattmann, confessor of the faith, an admirable zeal for helping the poor and the sick and for practising loyalty and charity towards his family.
Through his intercession grant us that we may always help our brothers and sisters in need and that we may serve you faithfully amidst all the circumstances of our life.
Grant this through our Lord Jesus Christ, your Son, who lives and reigns with you and the Holy Spirit, one God, for ever and ever.

Those who obtain favours through his intercession are asked to notify the
Diocesan Authority,
9701 Szombathely, Pf. 41.