Now, thanks to the GoodSciencing.com team, we have a comprehensive list of athletes who have collapsed and/or died since January 2021, a month after the first Covid-19 injection was administered to the general public.

Because it is such as long list we are not including it in this article so that full list can be accessed in full here.

The following chart shows the number of recorded athlete collapses and deaths between January 2021 and April 2022, courtesy of the linked list above –

As you can see there has undoubtedly been a rise from January 2021 onwards, the question is whether this was ordinary and to be expected. 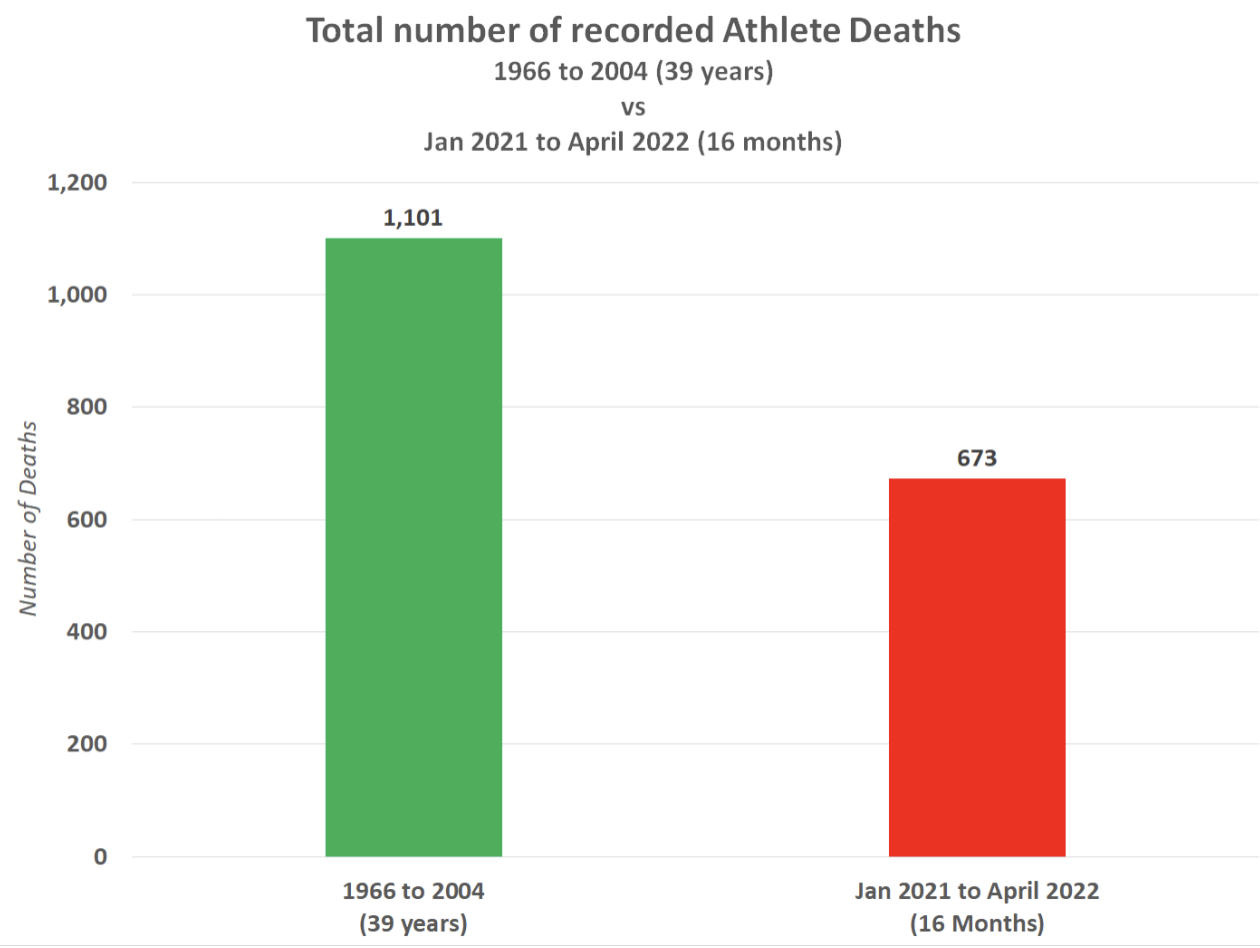 In all between Jan 21 and April 22 a total number of 673 athletes are known to have died. This number could, however, be much higher. So that’s 428 less than the number to have died between 1966 and 2004. The difference here though is that the 1,101 deaths occurred over 39 years, whereas 673 recent deaths have occurred over 16 months. 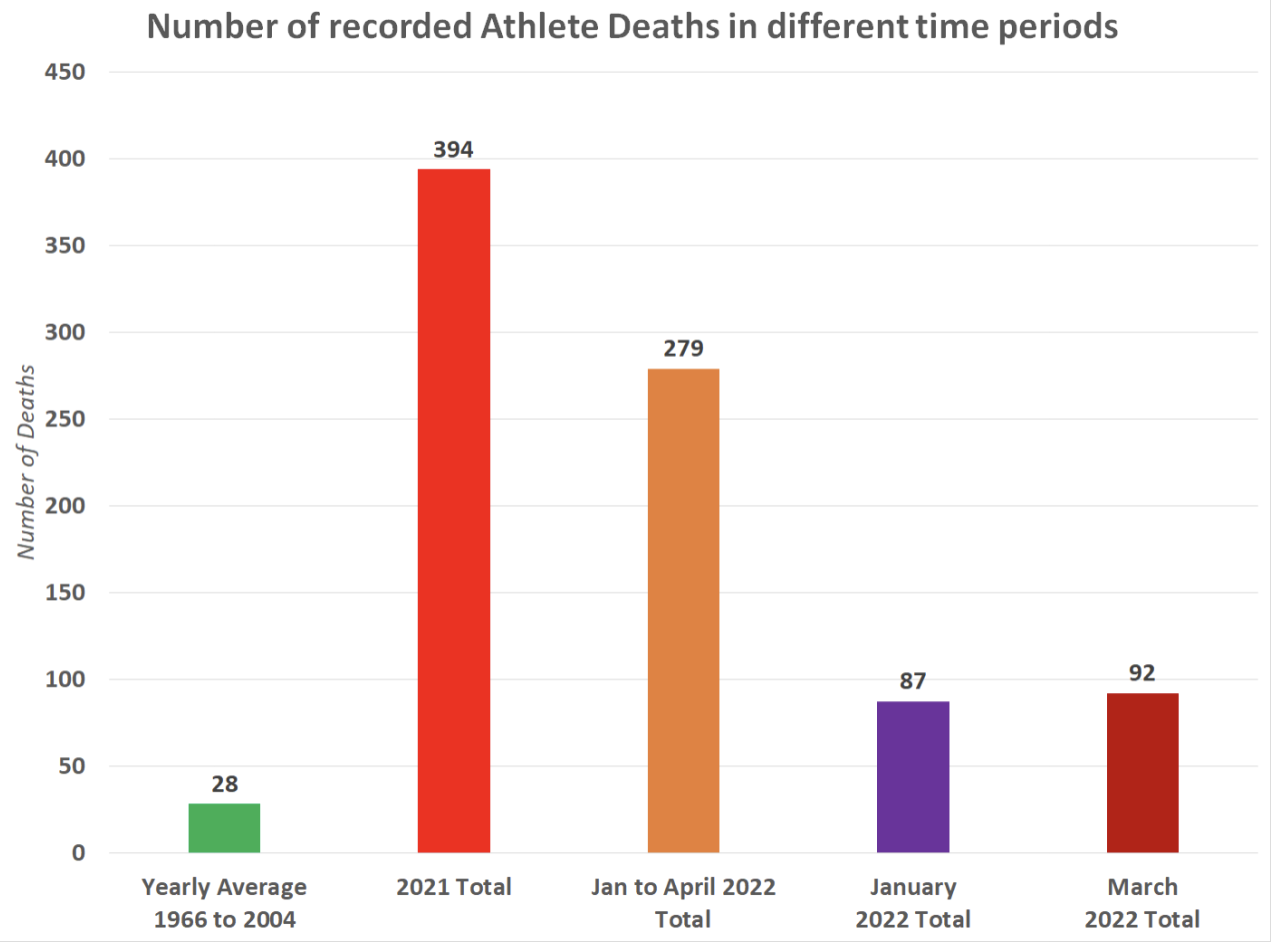 The yearly average number of deaths between 1966 and 2004 equates to 28. January 2022 saw 3 times as many athlete deaths as this previous annual average, as did March 2022. So this is obviously highly indicative of a problem. 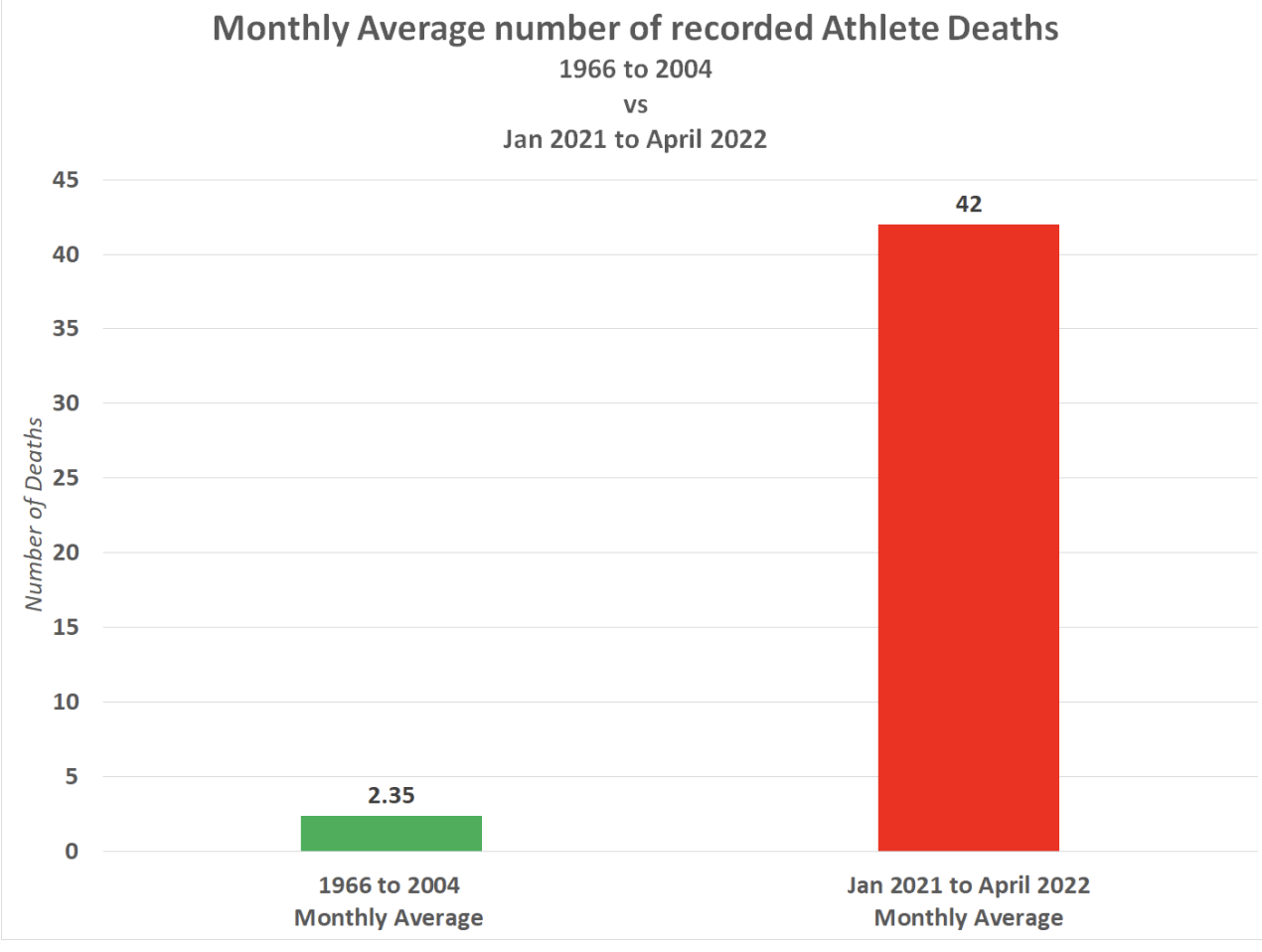 So why have we seen such a dramatic increase?

The answer most likely lies in the introduction of an experimental injection that was alleged to protect against Covid-19 disease but instead caused untold damage to the immune system and cardiovascular problems.

A study of 566 patients who received either the Pfizer or Moderna vaccines shows that signs of cardiovascular damage soared following the 2nd shot. The risk of heart attacks or other severe coronary problems more than doubled months after the vaccines were administered, based on changes in markers of inflammation and cell damage.

Patients had a 1 in 4 risk for severe problems after the vaccines, compared to 1 in 9 before. Their 5-year heart attack risk went from 11% to 25% thanks to the vaccines (that is a 227% increase).

Dr. Steven Gundry, a Nebraska physician and retired cardiac surgeon, presented the findings at the Scientific Sessions of the American Heart Association’s annual conference in Boston On November 12-14. An abstract of his paper was published on November 8 in Circulation, the AHA’s scientific journal.

But we really don’t need to look any further than the number of cases of myocarditis caused by Covid-19 vaccination. Myocarditis is a condition that causes inflammation of the heart muscle and reduces the heart’s ability to pump blood, and can cause rapid or abnormal heart rhythms.

Eventually, myocarditis weakens the heart so that the rest of the body doesn’t get enough blood. Clots can then form in the heart, leading to a stroke or heart attack. Other complications of the condition include sudden cardiac death. There is no mild version of myocarditis, it is extremely serious due to the fact that the heart muscle is incapable of regenerating. Therefore, one the damage is done there is no rewinding the clock.